Shall we get started?

🔹Blurb: A dark, unsettling thriller about a young female journalist drawn into the life of a troubled Hollywood A-lister.

You have to know when to say no. That’s one of the first things they tell you. But from the first day I arrived in Los Angeles, I said yes.

Jessica Harris is a struggling Hollywood reporter hungry for her big break. When her editor asks her to profile movie star Clark Conrad, Jessica is sure her luck is on the turn. Clark is an A-lister with access to everyone. If Jessica can impress him, she’s made it.

When she arrives at Clark’s mansion in the Hollywood Hills, he is just as she always imagined. Charming, handsome yet disarmingly vulnerable. But then things take a darker turn. Clark’s world is not as straightforward as it seems and Jessica’s puff piece soon becomes something much more delicate – and dangerous. As Jessica draws herself deeper into Clark’s inner circle, events begin to spiral out of her control.

🔹Extract: I refuse to entertain the thought, for the rest of the day. I write the captions for a gallery of ‘The 19 Best Colours To Paint Your Bathroom, According To Instagram’, and outline a draft of ‘10 New Year’s Resolutions For Your Home’ for tomorrow, anything to distract myself from thinking of Jackie and Eleanor currently evaluating my clips, holding my dream in their hands without even realizing it.

On my way out of the office Jackie calls out to me and I spin on my heel, go running.

‘I just wanted to say, your clips are good. You’re a strong writer, sharp and concise and voicey. I’m happy to have you do this piece.’‘Thank you so much. This is a real honour.’

‘Justin’s filled you in on the tight turnaround, right? You’re going to his house this Friday, you have a half-hour with him, and we need the piece to run before the end of next  week.’

‘That’s not a problem. I can get it done. I’m already pretty familiar with his work.’ All my energy is focused on staying calm, keeping my voice steady, not revealing what is happening inside me. Do not seem like anything more than a rookie eager for her big break.

‘Great. So here’s my one tip for you: go in with a headline already in mind. It can change, of course, but don’t walk in there without an angle. You may be there for Nest, but you’re still a reporter.’

‘I know, it’s probably anathema to everything you’ve been taught. Never decide what story you have before you have it, follow the facts, all of that. But we have so many restrictions on this that I’m concerned we’re going to end up with nothing. Clark Conrad is a star, obviously, and we want this article to have breakout potential beyond our regular audience. I want people to read this piece even if they don’t care about interiors. So go in with an angle – something good, something people will click on even if they don’t care about Clark Conrad – and then whatever non-answers he gives, at least you’ll know how to direct the conversation.’

Again, I bristle. She’s so certain that I’ll get nothing, that Clark Conrad will play the PR game and I won’t have the skills or the guts to draw anything out of him. But I smile, and thank her, and leave with headline possibilities already bouncing around my mind.

Back home, I try to settle in for a normal evening, a quiet evening, but I barely remember how. This is the first free night I’ve had in weeks and it’s only free because I forgot to respond to the editor who asked me to cover a red carpet. This would normally drive me crazy, the idea of missing out on an assignment, but now everything feels distant and I’m still not quite allowing it to sink in, the reality of what I am doing two days from now.

I run, finally, because it’s been a couple of days and my muscles feel twitchy and tightly coiled. I do not miss a workout, not ever, not until recently when there haven’t been enough hours in the day, and I have to find a way to make it work because without exercise, my thoughts spin out and become uncontrollable. I know this, have learned this, but still it’s an effort. Three years in LA and I still haven’t adjusted to how much planning it takes to go for a run here, how the sidewalk drops away unexpectedly to remind you that this is a city built for cars, not for people, not for human movement. Being so reliant on mechanical cocoons to get around makes me anxious, and so I opted for Echo Park, with its relative walkability and its lakeside running loop.

A popular myth holds that the Echo Park lake used to be full of bodies – murder victims from back when gang violence still had a strangle-hold on this area. I believed it for most of my first year here, until l looked more deeply into the local lore and learned that while there’s a lick of truth to it, the bodies were mostly drownings and suicides. Now the lake is my favourite thing in the city, a picture book gem dotted with sailboats and lotus flowers and palm trees, a perfect view of the downtown skyline spread out behind its glimmering surface. Some days, it’s the only thing that makes living here bearable.

After seven laps of the lake I feel wrung out and blissful, and finally I allow my thoughts to go to him. Clark Conrad. Back in my apartment I start streaming Loner, the beloved NBC drama which brought Conrad his breakout role, and after five seasons gave him the springboard to become, against the odds, a movie star. I have every boxset on my shelf, of course, their cardboard corners tattered from years of use, but nothing to play them on since my DVD player finally died last year.

🔹My Thoughts: If you want different, dark, seedy, egotistical and the corrupt life of Hollywood and media then this my friends is for you. If you’re wanting a Thriller then I’m afraid you should look elsewhere.

I honestly don’t know what I was expecting when I went into this read, but I will admit to being very pleasantly surprised and loved the authenticity that came through.

Plus, direction change please! Fuck me, was that a good one. I am saying no more or I’ll end up throwing spoilers here, there and everywhere.

Go and find out what happens for yourself… 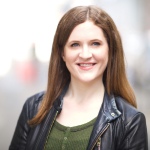 Emma Dibdin grew up in Oxford, and now lives in New York. She is a writer and journalist whose work has appeared in Esquire, Marie Claire, Harper’s Bazaar, Cosmopolitan and Total Film. Her second novel, Through His Eyes, is also published by Head of Zeus.

To find out more or get in touch with Emma you can do so by using the links provided below.

Title: Through His Eyes.

So, that’s it from me. Again, thank you for stopping by and I really do hope you’ll go grab yourself a copy of this book.

Huge shoutout to Emma herself and the lovely Florence over at HOZ for inviting me onto the tour.